Trilha dos Tucanos is a private property located in the Paranapiacaba sierra at Tapiraí city (São Paulo state). Easily accessible, it is an excellent choice to spend the day or even to extend your stay, sleeping in one of the lodges. It is a good idea to book in advance as the place is in high demand, especially from birdwatchers!

And it’ is no wonder! About 80% of Tapiraí territory is covered by Atlantic Forest. Travelling by car, we perceived a radical change in the landscape when we entered the city; much greener with plenty of shade. When we passed through Sorocaba it was over 30 degrees, but in Tapiraí we found a pleasant temperature and a very cool night; quite a relief after one of the hottest weeks of the year in the state of São Paulo.

We arrived in the late afternoon and shortly afterwards the weather closed in and thunder arrived. We walked quickly through one of the trails but, as it was dark in the forest, we preferred to end the day watching the many birds in the feeders around the lodge. The video below shows one of the feeders. The angle is not the best, but you can see the variety of species that appeared in less than 3 minutes of recording: 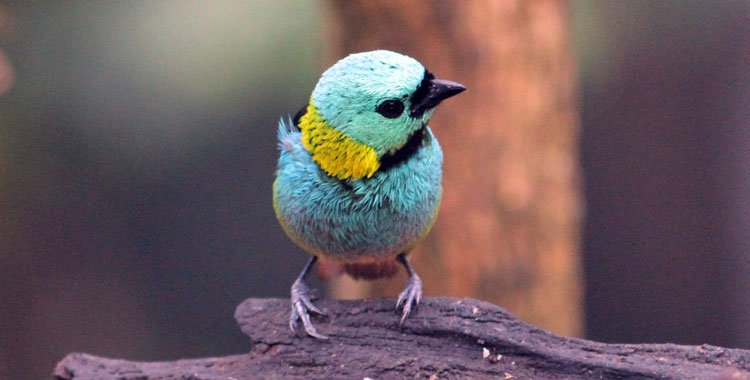 The next morning we woke up early and took a good walk on the trails. As is to be expected in a closed environment like the Atlantic Forest, most of the contacts we made were through sound. The first one I recognized was the Brown Tinamou; then we listened to the Striped Cuckoo and the Hooded Berryeater.

Along the trail the easiest species to observe (but not to photograph) is the Riverbank Warbler. There were many couples, very active and always near the streams. Another very common species to be found there is the Olivaceous Woodcreeper, which vocalizes a lot and is always busy, looking for insects in the bark of the trees. Much easier to see is the Planalto Woodcreeper, particularly at the edge of the forest, near the clearings.

Along the trail we also saw a bunch of Fawn-breasted Tanager, a couple of Plain Becards, Variegated Flycatcher, Rufous Gnateater, Rufous-capped Spinetail, Slaty-breasted Wood-rails, Black-goggled Tanager, Swallow-tailed Kite… So it began to rain and we decided to take a break. On the way back, right there where we were told, we find the friendly Atlantic Royal Flycatcher and its nest. This species is endemic and, unfortunately is threatened.

Because of the rainy weather we decided to finish our tour watching the bird feeders again. This time I took advantage of having more light than the previous day and photographed some of the many hummingbirds that were vying for the feeders. The Brazilian Ruby dominated and tried to prevent others from getting close to the feeders, but there were so many feeders that it was not able to succeed.

Despite the name of the place we found no toucans, so I chose que Olive-green Tanager to illustrate this post. The Olive-green Tanager is an endemic bird of Brazil, which means that it can only be found here, most precisely in the mountains covered by Atlantic Forest, from Rio de Janeiro to Santa Catarina.

This was one of the best birdwatching trips I have ever taken. The variety of species is huge, the trails are clean and well maintained. It is a true paradise, relatively close to São Paulo city. We were very well received by the owners, a nice couple who loves to chat about birds. I highly recommend a visit!