The Cantareira State Park covers almost 8,000 hectares of Atlantic Forest. It is so large that it it extends to areas of four São Paulo municipalities: São Paulo, Mairiporã, Guarulhos and Caieiras. For this reason it is not possible to experience the whole park in just one day.

We were in São Paulo last September 7th (holiday) and took the opportunity to explore the portion of the park that is closest to the city: the Pedra Grande Visitor Center (“Núcleo Pedra Grande”), which is located only 10 km from Sé Square. We arrived there early morning and found a small group of people awaiting to enter the park, which opened promptly at 8 o’clock. 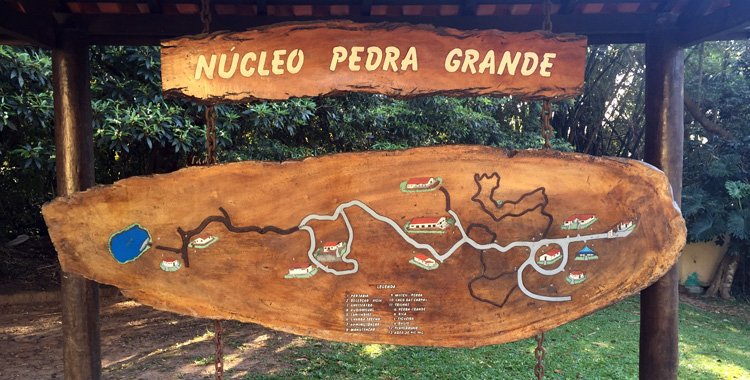 The Pedra Grande Visitor Center has some options of trails. We were advised by other birders to chose the Figueiras Trail and the Bugio Trail, which are shorter, flatter and with less flow of people. Once we did not know the park and we were very willing to walk, we opted for the Pedra Grande Trail, which is 9.6 km (round trip). It is somewhat steep, but the road is paved and quite easy.

I was enjoying only with binoculars, didn’t even take the camera out of the backpack. I have done this more often, the problem is after that I have no records to illustrate my blog posts … Luckily Victor made some photos! 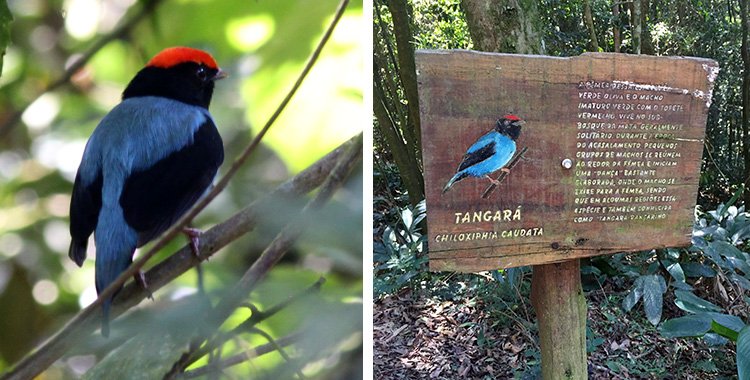 At the beginning of the trail we found a sign with some information about the Swallow-tailed Manakin, one of more than 300 bird species that occur at Cantareira State Park.

Small, the Swallow-tailed Manakin is about 12-13 cm, being easier to hear than to see. The female is even more difficult to observe because it is green, camouflaging in the middle of the leaves. This bird is known in portuguese as “tangará-dançarino”, which means something like “Dancer Manakin”, referring to the elaborate dance that males perform during the breeding season.

During the ascent to Pedra Grande we saw many parakeets, that flew in flocks over the trees. We stopped to see a Olivaceous Woodcreeper that was looking for insects in the trunks of the trees, while a mixed flock made noise in the canopy. Overhead, a little Blue-naped Chlorophonia paraded for a few seconds and flew. A little later we reversed papers, and a White-eyed Foliage-gleaner stopped to watch us, very suspicious. 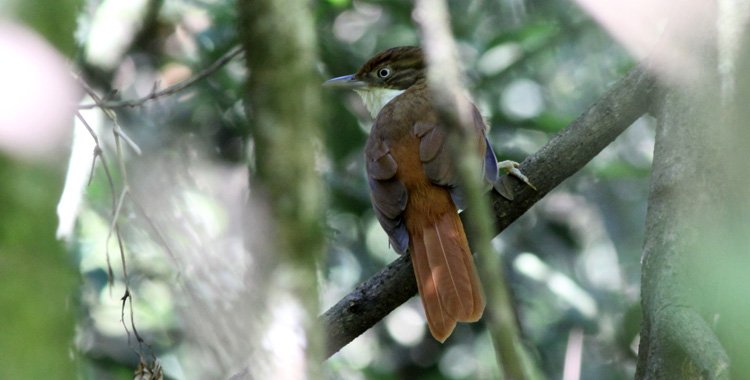 The view up there is fantastic. Worth the walk! When we arrived there were less than ten people, but a few minutes later the Pedra Grande was crowded. We tried to visit a small museum that was built there, but it was closed. So we decided to stretch the trail a bit and walk one extra mile to” Lago das Carpas”. The place is nice, but it was already 10 o’clock and the park was very crowded.

Coming back is easy, downhill. We passed by an increasing number of people who were going up towards Pedra Grande. It was a little disappointing because I did not expect to see a crowd like that there, but at the same time I was happy to know that there are so many people willing to wake up very early on a holiday to enjoy the place (the park only opens for visitation on weekends and holidays). Still, we could hear some birds amid the buzz: White-browed Warbler, Yellow-olive Flycatcher, Rufous-browed Peppershrike, Variable Antshrike, Dusky-legged Guan… even the most discreet Gray-fronted Dove.

We really enjoyed the Pedra Grande Visitor Center, the forest is very beautiful in this portion of the park. I hope I can go back and explore the other trails some day. But there are still three visitor centers for us to know: Engordador, Águas Claras and Cabuçu. Let’s go?