The green humor of Rohan Chakravarty

I found out the blog Green Humour at the beginning of the year, when a caricature became a hit, classifying the birdwatchers into 11 funny kinds. I ended up reading the entire blog, comic by comic, and found several posts where birds were the main theme. This week I contacted the blog’s author, Rohan Chakravarty, who, very kindly, wrote me about his cartoons and his concern for environmental causes.

Rohan was born in Nagpur, a region in India where the highest density of tigers from all over the world is found! Therefore, the city is known as the “Tiger Capital of the World”. He also was a volunteer at the local NGO, Kids for Tigers, dedicated to the conservation of the biodiversity. Growing up in this atmosphere could only result in a nature lover. Today, Rohan is an avid birdwatcher and tries to communicate environmental issues through his drawings, always so good tempered. 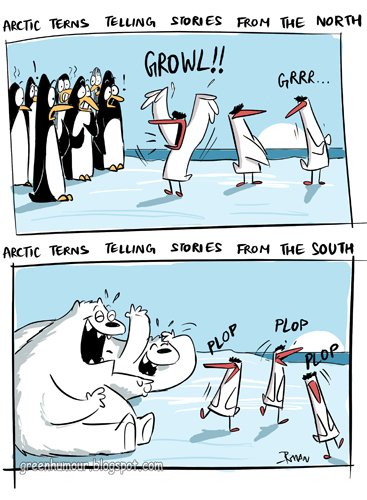 Sterna paradisaea is the bird with the longest migration recorded, 80.000 kilometers in a year. They spend a season at North Pole and another at South Pole.

The blog Green Humour was created in 2008 when Rohan was still at college (studying Dental Surgery!). At that time he realized that humor can be an excellent tool to get people interested about wild animals and to understand how we are threatening their survival. Many of his cartoons portray animal life curiosities. Others are deep, summarizing in a single image a full critique about how mankind has been damaging the environment. The cartoon below was awarded the first prize in the competition “Cartoon Contest – Climate change in Asia-Pacific, the people’s perspective”, held in February this year. 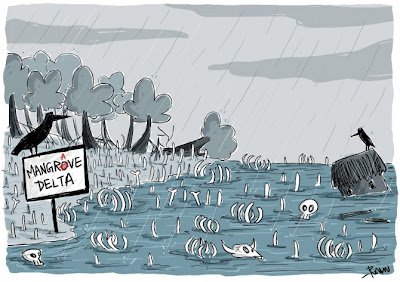 “Sundarbans” is a huge area of mangrove located in India and Bangladesh. This is a fragile ecosystem, very threatened by global warming.

The cartoonist has also received awards for cartoons about social aspects, another subject that he is very interested in. His early works portrayed civic issues, often using animals as characters.
Particularly, I find it very interesting the cartoons depicting specific environmental problems in India. The diclofenac case, for example, received a lot of publicizing. This painkiller was largely used in livestock, until it was discovered that it was responsible for the decline of three populations of vulture species. These birds, so important to public health, were dying of kidney failure. Even today this medicine is used in some places, despite being illegal. Another interesting example is the kite flying festival “Makar Sankrant”. Every year many birds are injured by colliding with glass-coated wires. 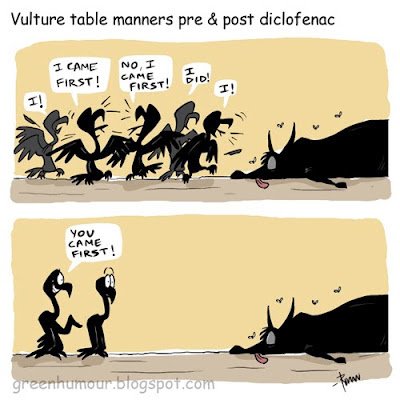 In an era of information and globalization, I still get very thrilled for being able to communicate so easily with someone who is so far from here, and belongs to such a different reality (or not) of mine. I hope one day I will have the opportunity to visit the land of this so talented artist!
CartoonsHumour
FacebookTwitterWhatsappEmail